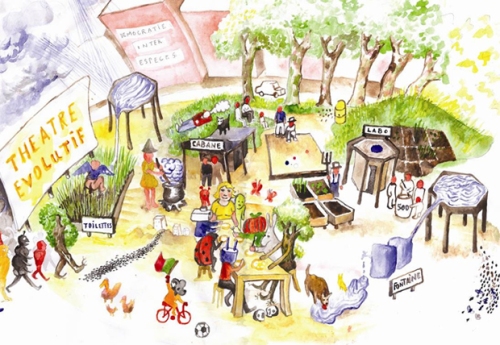 placemaking | What if an urban vacant space could turn into a social public space? What if the neglected brownfields that abound our cities were to become a means to social interaction, an urban catalyst of local ventures, a landmark? What if urban design turned out to be a social process? This is the first post of a new series dedicated to placemaking, to projects born in these urban gaps, grown from social participation and involved in sustainable urban development.

Théâtre évolutif, carried out by the Bureau d’études collective (France), the artistMarjetica Potrc (Slovenia) and the architects Ooze (Netherlands) invited to collaborate for the Evento 2011, is a co-designed and co-constructed landscape and architecture installation aiming to inspire the future design of André Meunier square.

In the heart of Bordeaux (France), alongside the main avenue Cours de la Marne and close to the train station, sits André Meunier Square, one of the city’s biggest public space and yet, vacant. Situated in St Michel, middle class district hosting mainly immigrants, this urban gap, despite many previous attempts of improvement, remains pending to be occupied. Today, along with an urban requalification program of the district, the square is expecting a radical transformation.

From the 6th to the 16th of October took place in Bordeaux, Evento 2011, an international artistic event. Under the slogan “Art for a re-evolution”, the experience gathered artists from all around the world willing to carry out innovative reflections on urban public space, through creative and social temporary projects. On this occasion, the collective Bureau d’études, think tank and main coordinator of the project in André Meunier square, the architects Ooze and the artist Marjetica Potrc were invited to set up a participation process to design an urban microproject. Local citizens, associations, collectives and volunteers were invited to collaborate for a collective brainstorming around the installation, aiming to inspire the public space’s outcome.

The design process began last summer, officially on July 19th, when participants signed a charter aiming to define common objectives and to engage the members in a common process of design and participation of what would become the Théâtre évolutif. The name of the project highlights two intentions: théâtre, meaning theatre, as for a place where a diversity of individuals may interact, and évolutif, meaning having the capacity to evolve with time and adapt itself to its surrounding, both physically and according to its use. Conceived as a template of urban ecosystem, the project combines a landscape and architectural design and underlines the will to inspire a flexible public space, open to occasional interventions and spontaneous use.

Construction began on September 2nd, gathering all members implicated in the project and two architects, Alan Gentil (from Bureau Baroque) and Marc Berbedes (from Bureau d’études Bois Structures). The project was gradually put together between the stubbornly standing do-it-yourself shed, the Cabane à gratter, built in 2008 from waste materials with Les P’tits Gratteursassociation (actively working in the district since 2001) and the menacing municipal construction site of the upcoming parking lot, actually occupying ⅔ of the square. According to its environmental commitment, the structure was made with the trunks of the condemned trees of the adjacent construction, and other building sites in Bordeaux. Free of any determined function, it puts forth more than a space, a welcoming face and a potential of various uses and occupations, aiming to inspire long term involvement.

During Evento, the Théâtre évolutif invited people to take part in workshops such as planting herbs or making “seed bombs”, weapons of mass plantation (with Friche and Cheap association), to enjoy a shady 5 meters high stroll in the treetops (with Adrenaline association), to learn about aromatic herbs and birdhouses along with Bernard le jardinier (from La Maison du Jardinier), to make herbal tea from the plants collected on-site, or even enjoy free collective meals… But what next ? Gabi Farage (Evento commissioner) underlines that the real outcome of the project wasn’t the “one shot” of Evento but relies in its capacity to evolve, hence its name. A closing event on October 15th gathered all the citizens implicated in the process to talk about the future: how can we, real users of the square, get involved in its outcoming design? Evento was just the first baby step of a social process of great ambitions.